Probably the number of listeners to his songs ("Songs From No

One In Particular 'was reviewed here last year) increased,
otherwise this CD did not come back. Another album that previously
(2011) is released digitally and only now as the official disc sees
light of day. Meanwhile I made a blog full of poems of this London based
singer-songwriter consumed and knowledge "Another
Academy" (2013), an album of spoken word of Charles Bukowski,
where Jeff Bell composed the music for.
Jeff had already convinced me with the previous CD, I wonder what
he's going to bring ... The opening song ("Get The Chains') was
again short, but very successful, with horns and cooperation of a
French group, Le Skeleton Band. The blues "Cast The First Stone"
rocks also nice way with a fine electric guitar, a little Johnny Dowd like
and gets at the end of one line "Papa Was A Rolling Stone"
with. Then we pull cloudy, desolate landscapes folk inside. The
dark, of loneliness drenched ballad "All I See Is You" suddenly does
strongly Nikki Sudden's album "Red Brocade" thinking, with wine
stains on the comforter and all. Laminated built tracks "Victims" and
"Lay Me Down" fans will Vic Chesnutt not fail to impress, I think. It'
hard to believe that Jeff plays all the instruments and sounds
creates itself. We hear a piano and other unexpected sounds in
"Another Year," when writing Jeff got help from a fellow townsman,
the singer Pete Hill. "Say A Prayer" sounds more like a rebellious
discussion with the higher power, instead of a prayer. "Hometown"
even calling the album "Goodbye Joe Russ Tolman recalled: I love
sung once of those close to the microphone, deep hoarse guttural
sounds ... With a huff" Guess It Worked "we reach a sarcastic complaint
traditional blues form addressed to the National Health Service: the care
in England is also a mess! Finally, we are treated to more than nineteen
minutes long bonus track, the sweeping "Wasted Hours (To Be Cont.)",
To which the Australian drummer Ryan Kalkman (from the London band
Mouths) participates.

While still intuitive and quirky put down, imbued with emotional and
sometimes sharp lyrics, this album is a bit more accessible and varied
than its predecessor. For the music lover who likes to have some trouble
over to dive for pearls! (Independent)
Translated from Flemish.

Of Faith And Devotion. Jeff Bell might have done well to call this
one Songs Of Wrath, Emotion And Vengeance. Because that's
exactly what this album is. Tunes such as Guess It Worked and All I
See Is You wreak of experience and a life lived on the tightrope
between joyous hope and eternal frustration. This is a real
Pandora's Box of an album. You want to peek inside and not
knowing whether you'll be stabbed or embraced by the next song
makes the temptation to do so all the more exciting. This is a very
tight set where every note is toughened and sweetened by beautiful
folksy arrangements. ****

Poem Whispering Grass from soon to be published Johnny The Moth - Selected Poems, plus song Hour Of Need taken from album Songs From No One In Particular, played on Paul Mansell's World Folk Show - Marlow FM97.5 Radio Station, Saturday 21st Feb 2015. ( from 73:00).
http://jeffbellmusic.blogspot.co.uk/2015/02/jeff-bell-poem-song-world-folk-show.html 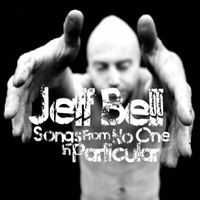 Mainstream Country music is the equivalent of TV evangelist’s churches; Bell is more like a one-man ministry preaching in a rough-hewn church where the only polish is the repeated rubbing of threadbare Sunday best suits on the pine pews. His sermons champion love and the soul over the material world, his voice is a rough instrument and it can be traced back to the gospels of Captain Beefheart, Tom Waits and Paul K. It's weather-beaten, pitted with experience and age - on ‘Guess It Worked’ he sounds like he’s at a revivalist meeting trying to conjure up the lord from a jar of spiders. He’s helped out on this record by the French group Le Skeleton Band who do a mean Magic Band impersonation on ‘NHS Blues’ which sounds like a collaboration between Beefheart, Mike Leigh and Benny Hill. There are also traces of funk and jazz on ‘Get the Chains’ a mutant funk, but funk nonetheless and RnB rears it head on ‘Cast the First Stone’ not least when it morphs into ‘Papa Was a Rolling Stone’.
Bell has an everyman persona and his songs approach universal themes through the personal, he manages to put an individual spin in each song; ‘Another Year’ uses piano as a differentiator, whereas the bulk are predicated on the guitar - ‘I Saw It’ finds its own way with organ being used for punctuation. Bell has a likeable approach and sounds at his best on the relaxed ballads ‘All I See Is You’ and ‘Lay Me Down’ which necessarily focus on him. The songs are spectacular, they don’t aim to be, they are honest and truthful and in a world full of artifice, it is a good quality to have.

Tastes differ, but if someone from the first note knows how to pack a punch, it's good for me, and Londoner Jeff Bell succeeds with flying colours. The sordid rockers, "Get The Chains and "Cast The First Stone", the brilliant "All I See Is You", to the beautiful, somber folk - ballads like "Lay Me Down" and "Hometown" prove this in abundance.

Poet, singer, multi-instrumentalist and songwriter Jeff Bell was until recently completely unknown to me. Yet he's already had some nice music released, including an album of haunting poems by Charles Bukowski, where Jeff Bell has added music. The man's obstinacy is also evident from his website, where a whole page titled "The Art of Neglect " is dedicated to the stages of disintegration of a garden parked grievously neglected harmonium.

Vocals and lyrics breathe of London, liquor, cigarettes, drink away your heartbreak in dark bars, loneliness and gloom. Think of Bob Dylan, Mark Sandman (Morphine), Ian Siegal or Tom Waits; artists for whom it is also about feeling, rhythm, language, song and voice, and not always to play nice and pleasing.

A large part of the songwriting and arrangements are Bell himself, but he
also has support from the French Le Skeleton Band and Australian drummer Ryan Kalkman, plus on "Another Year", he and fellow Londoner, Pete Hill collaborated together. Sometimes the sound is raw, with derailing blues guitar and blues harp, while the melancholic piano ballad "Another Year" uses the sounds of a cello. Especially in his folk -like ballads opts for Bell somber chords and desolate atmospheres. "Humorous NHS Blues" then describes the discomforts of the hospitals in the UK National Health Service , and the album finishes with the hypnotic meandering 19 minute finale "Wasted Hours".

Bell will, thanks to this album, probably will not go bathing in wealth and fame, but it will certainly find its way into the hearts of many enthusiasts.
(Translated from Flemish).
http://www.writteninmusic.com/roots/jeff-bell-turned-every-screw/lang/nl/